De Nieuwe Compagnie van Verre, the N.C.V., was founded on the 8th of Februari 1947, one year after the foundation of het Nederlands Opleidings Instituut voor het Buitenland, het N.O.I.B. The N.O.I.B. was established directly after the Second World War in order to rebuild the economy of the Netherlands. It was, therefore, tailored towards preparing young and talented Dutch men for a career abroad. This preparation was focused on the ideology of American Schools, which meant a lot of sports was integrated in the studies along with living with roommates.

The foundation of the N.C.V., in 1947, was in collaboration with our honorably member and patron ZKH Prins Bernhard von Lippe-Biesterfeld. Since then a lot has changed at Nyenrode. Women were allowed to study on campus for the first time in 1972, and the study program changed from BBA, to IDP and to MSc. In 2016 the Bachelor program returned to Nyenrode, allowing for young students to get their bachelor's degree after a 3 year program. 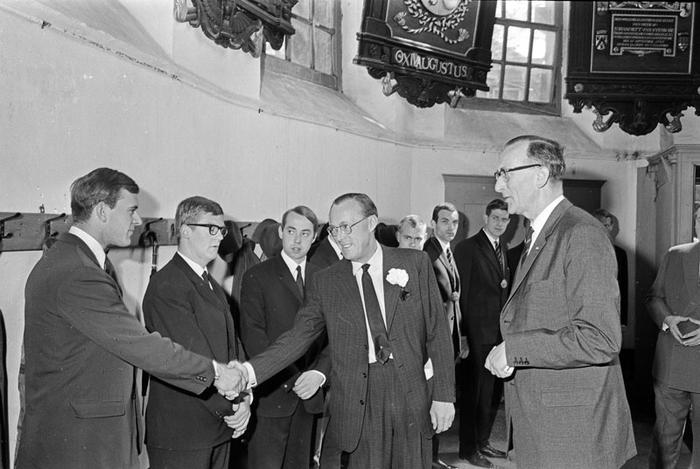 De Nieuwe Compagnie van Verre has its homebase on the beautiful Nyenrode Estate. Ever since the establishment of the N.C.V. in 1947, the Student Association has been guest on this estate and its values and traditions have been heavily influenced by this location. The castle was built in 1275 by Gijsbrecht van Ruwiel for his son Gerard Splinter van Ruwiel. The castle was inherited from the one generation of nobility to the subsequent generation. Over the years, the castle has been used as a home, a military academy, an art gallary and now a university.